RadioText.net is a site that transcribes news episodes from Swedish Radio and makes them accessible. It uses multiple AI-based services in Azure from Azure Cognitive Services like Speech-to-Text, Text Analytics, Translation, and Text-to-Speech.

By using all of the services, you can listen to “Ekot” from Swedish Radio in English :) Disclaimer: The site is primarily a technical demo, and should be treated as such.

Just to give you (especially non-Swedish) people a background. Sveriges Radio (Swedish Radio) is the public service radio in Sweden like BBC is in the UK. Swedish Radio does produce some shows in languages like English, Finnish and Arabic - but the majority is (for natural reasons) produced in Swedish.

The main news show is called Ekot (“The Echo”) and they broadcast at least once every hour and the broadcasts range from 1 minute to 50 minutes. The spoken language for Ekot is Swedish.

For some time, I’ve been wanting to build a public demo with the AI Services in Azure Cognitive Services, but as always with AI - you need some datasets to work with. It just so happens that Sveriges Radio has an open API with access to all of their publically available data, including audio archive - enabling me to work with the speech API:s.

The site runs in Azure and is heavily dependant on Cognitive Services. It’s split into two parts, Collect & Analyze and Present & Read. 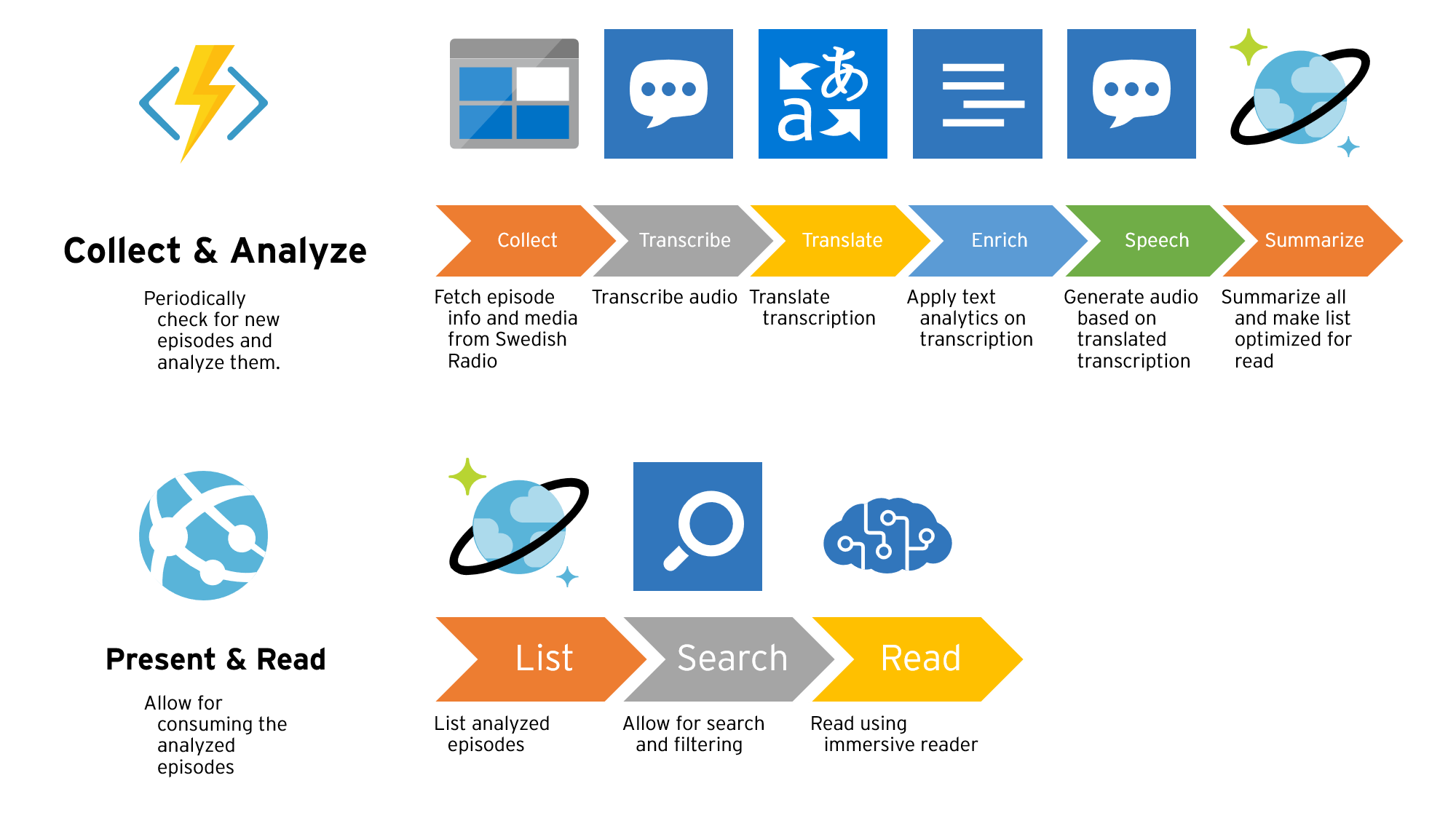 The collect & analyze part is a series of actions that will collect, transcribe, analyze and store the information about the episodes.

It’s built using .NET Core 3.1 and can be hosted as an Azure function, Container or something else that can run continuously or on a set interval.

The site that presents the data is available at https://radiotext.net/. It’s built using ASP.NET Core 3.1 and is deployed as a Linux Docker container to Dockerhub and then released to an Azure App Service.

Currently, it lists all episodes and allows for in-memory filtering and search. From the listing, you can see the first part of the transcription in English and listen to the English audio.

By entering the details page, you can explore the data in multiple languages as well as the original information from the API. 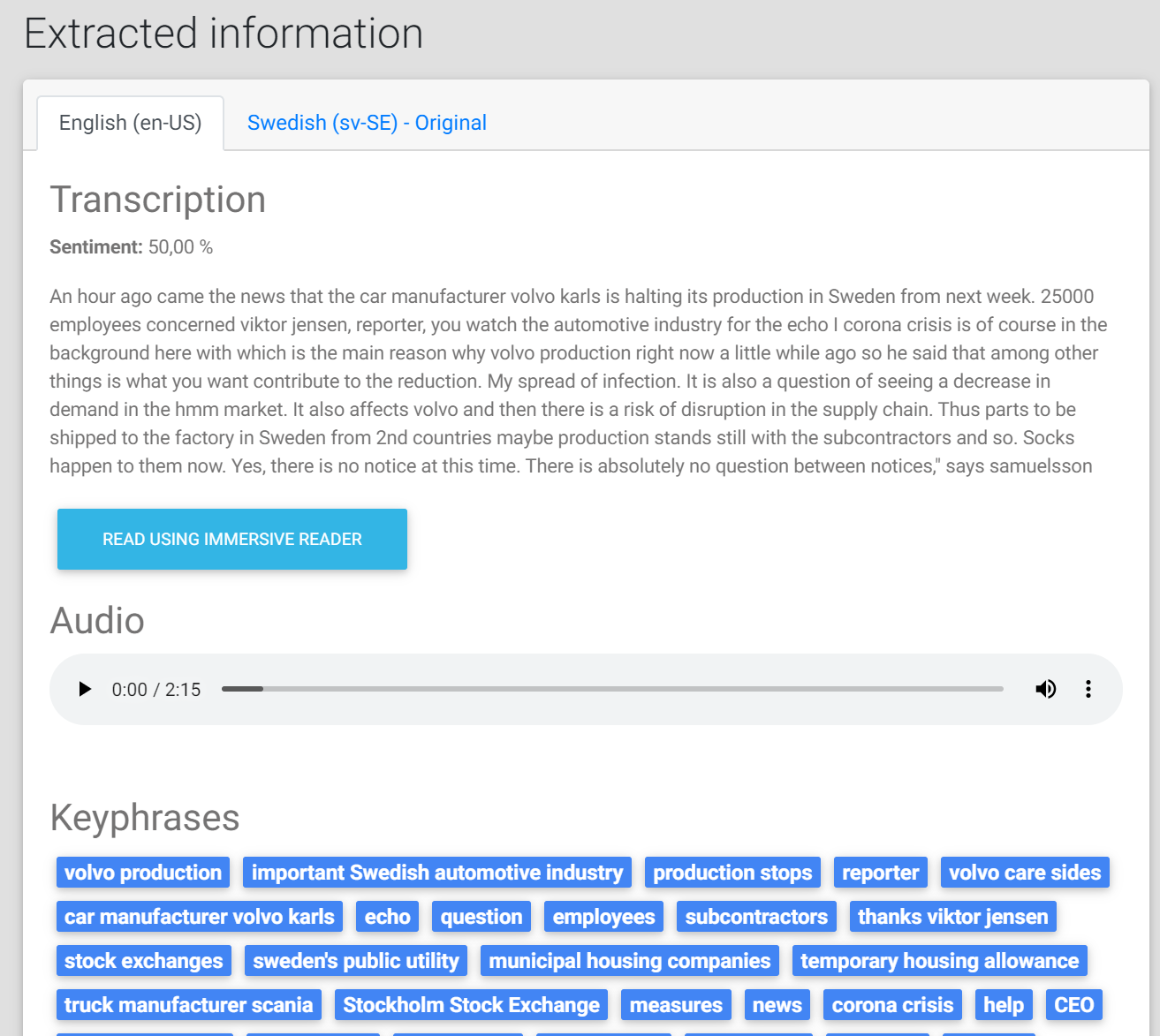 Immersive Reader is a tool/service that’s been available for some time as part of Office, for example in OneNote. It’s a great way to make reading and understanding texts easier. My wife works as a speech- and language pathologist and she says that this tool is a great way to enable people to understand texts. I’ve incorporated the service into Radiotext to allow the user to read the news using this tool.

Primarily, it can read the text for you, and highlight the words that are currently being read: 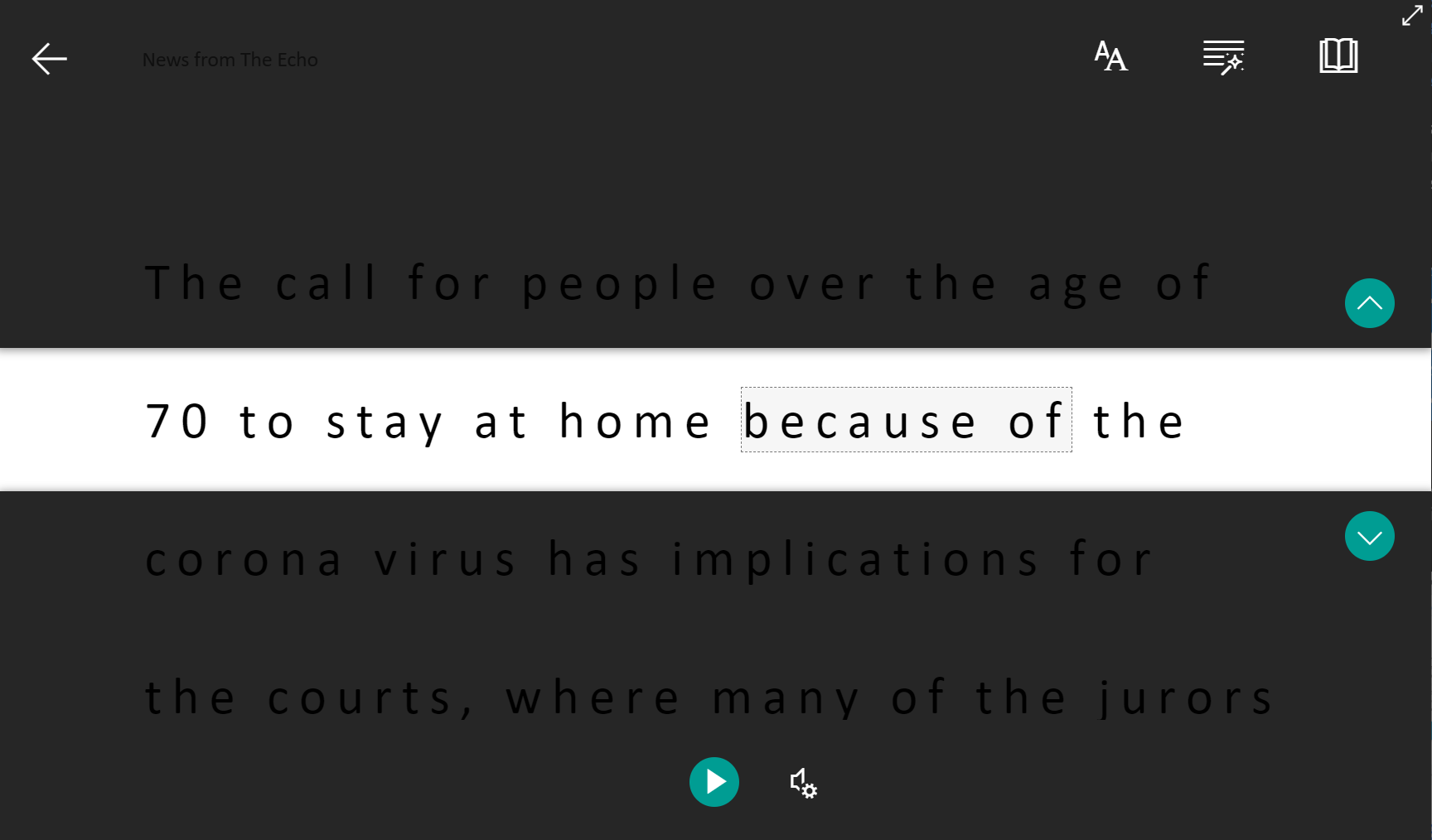 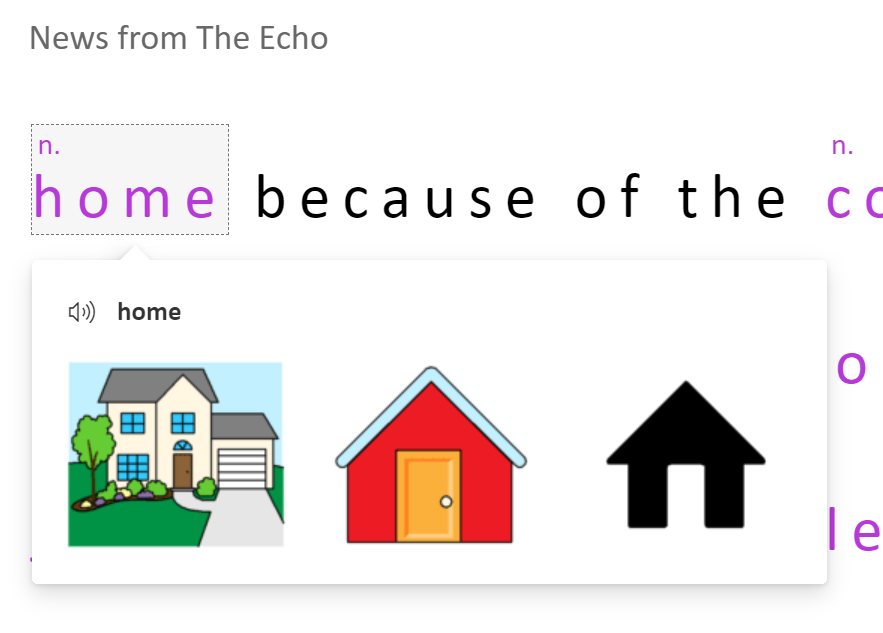 And if you are learning about grammar, it can show you grammar details like what verbs are nouns, verbs, and adjectives:

I’ve tried to get a grip on what the cost would be to do run this service and I estimate that to run all services for one episode of Ekot (5 minutes) the cost is roughly €0,2. That includes transcribing, translating, analyzing and generating audio for multiple languages.

Also, there will be a cost for running the web, analyzer, and storage.

The current application was done to showcase and explore a few services, but it’s not in any way feature complete. Here are a few ideas on the top of my mind.

This is an unofficial site, not built or supported by Sveriges Radio. It’s based on the open data in their public API. It’s built as a demo showcasing some technical services.

Most of the information is automatically extracted and/or translated by the AI in Azure Cognitive Services. It’s based on the information provided by Swedish Radio API. It is not verified by any human and there will most likely be inaccuracies compared to the source.

All data belongs is retrieved from the Swedish Radio Open API (Sveriges Radios Öppna API) and is Copyright © Sveriges Radio.

Try it out and contribute